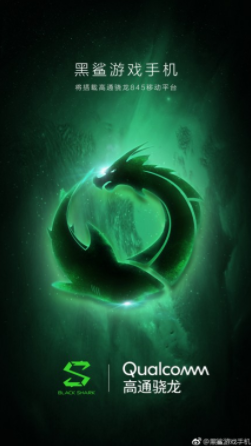 Initiate an invitation to confirm that Black Shark will launch a new player-centric smartphone to compete with products such as Razer phones. This invitation mentioned April 13 as the date the company will announce such equipment in Beijing, China.

A new beast has been spotted on benchmarking website with the codename of Black Shark while the manufacturer isn’t revealed but the codename suggests a connection to Xiaomi according to benchmark listing Xiaomi Black Shark will get powered by Qualcomm’s latest flagship processor the octa-core Snapdragon 845 chipset with eight gigabytes of RAM the listing has also revealed the key details of the upcoming Xiaomi gaming smartphone xiaomi black shark will feature an 18 – 9 widescreen ratio Full HD plus display and will be running on latest android 8.0 oreo out of the box this Eavis will pair the Snapdragon 845 processor with Adreno 630 GPU this smartphone managed to score a whopping 270,000 680 in the antutu benchmark which is higher than the score is achieved by the other snapdragon 845 powered devices like the galaxy s 9 plus if this leak has any chance of becoming a reality then we could either be looking at a new gaming smartphone lineup from xiaomi in a follow my blog for more  upcoming updates.

admin - April 4, 2018
0
Xiaomi recently launched its flagship product Mi MIX 2S, which is frameless and updated internally in China. There has been little improvement in the...

The third person’s intelligence game, The first tree going to the...