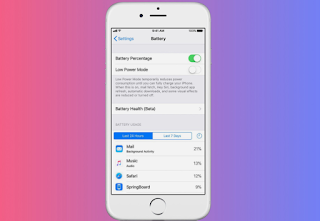 Apple’s new ios 11.3 update is a big one you see. apple recently admitted it slows down processors pused in iphone 6, iphone 6s iphone 7 and iphone SE these phones have aging lithium-ion batteries that might cause random shutdowns so to prevent them from shutting down apple pushes out an over-the-air update that throttles their CPUs and slower performace is a direct side effect Needless to say many IPhone owners are unhappy in response to all the backlash apple began offering cheaper battery replacements for older iphones and said that a new update iOS 11.3-would give users a new barrery health tool, as well as the ability to turn off the iphone’s throttling battery managemant feature apple, has now released iOS 11.3 here how its battery health tool works now rolling out iOS 11.3 has a battery health tool built into steps. 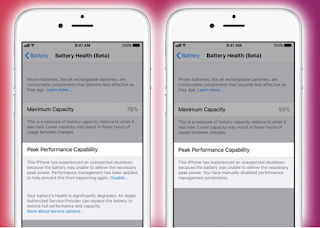 Just go to settings > battery > battery health [Beta] from there. your iPhone’s maximum capacity and peak performance capability you’ll even see whether your iPhone needs service and can subsequently
turn off the controversial throttling performance management feature that’s throttling your iPhone and finally, there is one other battery-related change in ios 11.3 improves this performance management necessary to avoid unexpected shutdowns if the battery health able to support the observed peak power requirements the amount of performance management will be lowered if an unexpected shutdown occurs again then performance management will increase this assessment is ongoing allowing more adaptive performance management.
Apple iOS 11.3 is here huge update adds battery health and more the ability to disable and even enable throttling is only available for certain iPhone.as newer iPhones aren’t affected Apple recently confirmed the iPhone 8 plus’ and iPhone X all have hardware update, so they are unaffected by the throttling p [ “performance management”] feature that it rolled out to unsuspecting customers. so you need one of the following older devices.
iPhone SE, iPhone 6, iPhone 6 plus, iPhone 6s, iPhone 6s plus, iPhone 7 plus, and obviously your device needs to be running ios 11.3 which is now available for consumers.after updating you,ll notice a new menu under battery in the setting app battery health [beta] top it you’ll then see a screen with link to more information about lithium-ion batteries below that. you’ll see your battery’s maximum capacity if this indicator is under 80 percent, you’ll see another message at the bottom of the screen that warns your iPhone’s battery is”significantly degraded’. There will be another link that will point you to page about how to get your phone serviced [Pocket-lint has a detailed guide on how and where to get your iPhone’s battery serviced-whether through apple, a third party,  or yourself.]   if your device has shut down due to battery degradation, this same screen will tell you that.

“Performance management has been applied to prevent this from happening again” there will also be an option to disable to the throttling you can’t enable throttling [the “performance management” feature until you experience another shutdown your iphone will auto enable it should that ever happen apple in the battery heralth [beta]menu, you’see a percentage that indicates your up iphone battery’s maximums capacity followed by a messeage explaining your iphone battery’s peak performance capability the message you get depends on the percentage shown for instance;100 percent your battery is currntly supporting normal peak normal peak performance 95 percent: this iphone has experienced an unexpected shutdown because the battery was unable to deliver the necessary peak power performace management has been applied to help prevet this from happening again disable 79 percent or less your battery’s health is significantly degraded an apple authorized service provider can replace the battery to restore full performance and capacity more about service options. unknown this iPhone is unable to determine battery health an apple authorized service provider can service the battery more about service options.

Apple explained that maximum battery capacity measures your iPhone battery capacity relative to when it was new batteries will start at 100 percent when first activated and will have a lower capacity as the battery ages. according to apple a normal battery is designed to complete charge cycles when operating under normal conditions now as far as peak performance capability goes it the ability of your iPhone’s battery to supply adequate charge if your iPhone’s battery maximum capacity is under 80 percent.
Then it’s health has been significantly degraded and it needs replacing you can grab the ios 11.3 updates now over the air via the settings app go to settings – general – software update devices eligible to upgrade include the iPhone 5s and later the iPad mini 2
air and later and the sixth generation iPod touch.

admin - May 3, 2018
0
Blackberry's KEYONE smartphone has surfaced. According to   reports, the  china TENAA office has certified the mobile phone.  The website also shows the latest rendering...